Let me start by welcoming you to my writings.   I don't claim to be a technical writer, but I have certainly paid my dues in words and ...

New AE’s are created every day in the form of applications that resemble building blocks with connectors that allow interactions and exchange of information that makes the sum of the blocks greater than the parts.  Each block represents a service that when chained together creates a system that can accomplish anything a creative mind can dream up.  The interfaces, the connectors, the API’s are the future of compute and are the backbone of the service catalog.  By stringing new chains of services together, companies are building the future DNA systems of markets and industries that will enable and empower machines to learn and adapt. This brave new world represents the growing overhyped term of the platform, but it is how the online future will be delivered.  Knowing how to link a UI/UX, to a set of algorithms formed into an application, to a virtual compute, database, and storage, and do it repeatedly is the new digital norm.  Often the end user doesn’t understand the intricacies of the components, but they do know when they are not working or behaving as expected.  The lists of successful platforms, when examined looks like the list of startup unicorns. 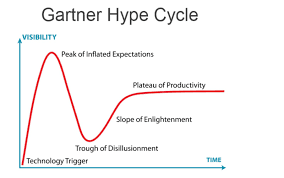 To take an idea, to grow and expand, to survive the hype curve and reach scale and profitably takes patience, vision, and smart people who can see beyond the pitfalls and learn from the missteps.  But this is not the real lesson, there are many companies who have shown they can reach productivity, and people who can repeat the exercise over and over again.  The lesson is that success starts from an idea, a service, an innovation.  It is the successful company that tries to repeat as a sophomore by jumping ahead of steps, whether hubris or expediency or economics, these attempts too often fail.  Gall's Law teaches that "A complex system that works is invariably found to have evolved from a simple system that worked. A complex system designed from scratch never works and cannot be patched up to make it work. You have to start over with a working simple system."  No one gets to skip steps when bringing a new innovation or disruption to the plateau of productivity.   This is where unicorns are bred, ideas are repeated over and over and over again until they are right, not perfected, but right.